Welcome to Monster Crafter Wiki, where you can get all the best info on strategies and so much more. Feel free to add your own designs and socialize with other crafters! 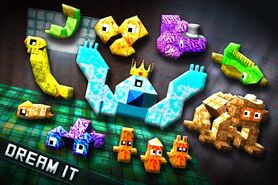 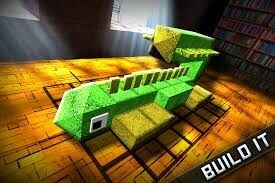 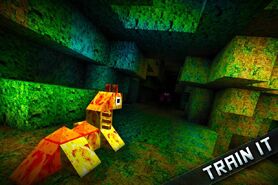 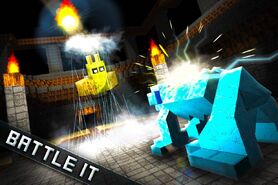 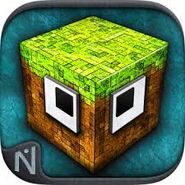 The icon
Add a photo to this gallery

Monster Crafter is an app for iOS devices such as iPod, iPad and iPhone. It has become very popular very quickly. As of when this wiki was created, it had 104 reviews and the average review is 4.5 stars.

There is also a Pro version offered for 99 cents which has no ads and coins are earned at a much quicker rate. The "Yes" and "No" buttons may also be switched.

The game takes place in 3030, where "monsters rule the world." The monster known as Lord Skullfury is supposedly their leader, and it is up to the player to stop him. In order to do this, the player must pick a Fire, Water or Plant egg and then build their monster. After the player finishes building his/her monster, they must complete dungeons in the Campaign to stop Lord Skullfury.

In addition, Rock and Electric Both require specific fees. Alien must be extremely expensive.

• DREAM IT. BUILD IT. TRAIN IT. BATTLE IT •  The sequel to Guncrafter has arrived! Craft your own pet monster. Train and care for it. Adventure through harrowing, boss-filled dungeons. Battle online against your friends, your enemies, or anyone in the world. MonsterCrafter is crafting + digital pets + monster battling…and there has never been anything like it.

• PLAY YOUR WAY • If you can dream it, you can build it. Create your monster any way you like. The way you craft it, the way you train and care for it…EVERYTHING affects your monster's personality, companionship, and performance in battle!

• ENDLESS CONTENT • The entire MonsterCrafter world is populated by player-created monsters! Every monster you see and battle has been crafted by someone. Show them who's boss!

• INSTANT MULTIPLAYER •  Enter the multiplayer arena and get placed in a lag-free multiplayer match in 5 SECONDS. With Naquatic's exclusive Quick Match system, you never have to stop playing. No waiting. No lag.

• Clan Dungeons • Start a clan with up to 10 friends and play through unique co-op challenges!

• JOIN OVER 50 MILLION GAMERS WORLDWIDE •  And find out why Naquatic apps like Guncrafter and Shooting Showdown have lit up the top charts and been featured by everyone from Apple to IGN, AppAdvice, and TouchArcade.

In order to build a monster, the player must pick an egg. The player can choose between six different types of monsters: Fire, Water, Plant, Rock, Electric, or Alien. After the player picks his/her egg, they must build their monster.

The player can now build their monster any way they wish using five different blocks and eyes, tattoos or hats. The five types of blocks come in four different colors depending on the type of monster. A monster can be revised anytime after it it made via the Evolve option when viewed in the stall. The color of block or type of eyes, hat or tattoos can be changed by double tapping the corresponding icon.

Cube: The basic block. They can't be removed after the monster is done but new ones can be added via the Evolve option.

Triangle: Can be attached to a cube and rotated.

Spike: Can be attached to a cube.Usually raises the amount of defense the monster has.

Half-cube: Can be either attached to a cube or be placed beside it.

Claws: Can be attached to a cube. Usually raises the amount of attack the monster has.

Ears: Can be attached to a cube.

Eyes: Can be either inverted or normal. They come in ones or twos.

Once the player decides they are done making the monster, they can hatch it and start raising it. They can also upgrade the grid for coins to allow for more space to make their monster.

Caring For Your Monster

The player must care for his/her monster on a daily basis in order to keep it happy. when battling. If a monster is not happy it will balk, or not attack, in battle, so it is of the utmost importance to care for the monster every day. To do this, they can perform nine different actions to keep the monster happy.

Food: Feed your monster a strawberry (2 coins), a carrot (4 coins), a turkey leg (6 coins), or an ice cream cone (8 coins). The more the food costs, the more it fills up your monster.

Water: Feed your monster a water bottle (2 coins), a soda bearing the MC logo (4 coins) or milk (6 coins). The more the beverage costs, the more it fills up your monster.

Ball: Use a basketball or a soccer ball (6 coins each) to play fetch with your monster.

Hand: Pet your monster to show it you care. (This is free.)

Scissors: Play rock-paper-scissors (2 coins) with your monster. If you win, it becomes happier.

Cherries: Play slots (5 coins for a spin) to obtain coins, happiness, or sadness.

Pillow: Give your monster a pillow (3 coins) for some good night's rest. (If you hit its' head and the pillow bounces away, it will just look at it).

Vaccine: If you leave your monster alone too long, it will need medicine (30 coins). Tap the monster to give it medicine.

Sack: Pinch with two fingers to pick up the monster's crap. (This is also free.)

If the player performs these actions, the gauge at the top of the monster fills up. The more full the gauge is, the happier the monster is. Happiness levels are listed below.

Sad: A blue frowning face. The monster will often balk, or not attack in battle, if left at this level.

Neutral: An orange face with no expression. The monster will sometimes balk if left at this level.

Happy: A lime-green face that smiles. Balking does not happen at this level.

Very Happy: The maximum level of happiness. A green face that smiles with an open mouth. If you are planning on a long, hard series of battles, bring your monster to this level.

Battling With Your Monster

All forms of battle take stamina. If you don't have any stamina left, you can wait for a certain time, displayed over the stamina bar, or refill it for a diamond. Max Stamina increases with your rank. Stamina does not exist in the Pro version.

To attack an enemy monster, simply tap it. The gauge at the left is your monster's elemental energy, which can be gained by collecting the element tokens that drop from the opponent monster when it is attacked. As the monster levels up, it learns new elemental attacks. Tap an icon to use the elemental attack/ability.

Depending on the level of your monster's happiness bar, it may balk. When it does so, it tips forward and simply refuses to attack. This is why it is so important to keep the happiness bar at least at the margin between "Happy" and "Very Happy", especially when fighting multiplayer or challenging a powerful boss. Balking in a battle of this importance can be disastrous.

Damage dealt and received is based off of the Attack and Defense stats of each monster, as well as how the elements of the monsters relate.

You can get one diamond every two months.(?)

1 diamonds can be used to replenish all stamina.

Retrieved from "https://monster-crafter.fandom.com/wiki/Monster_Crafter_Wiki?oldid=5706"
Community content is available under CC-BY-SA unless otherwise noted.